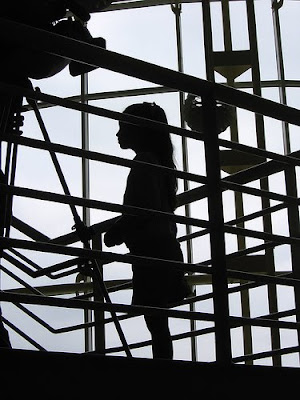 A friend took this picture of Catgirl a few years ago, when her artwork was featured at City Hall. She not only got to “cut the ribbon” for the exhibition, but she also spoke at the City Council Meeting and was interviewed for regional TV and newspapers. This picture is her standing in an open stairwell above the exhibit as the news reporter was preparing for her interview. I love how this silhouette captures her little-girl innocence at the same time as it shows a young woman prepared to meet the world.

I’m so thrilled that it’s my not-so-little girl’s birthday tomorrow. As I wrote earlier, she’s celebrating this year by heading to Washington DC as part of a Quaker lobbying group (a group that includes her Dad). Right now she’s doing last-minute prep for the trip–learning as much as she can about the relevant issues. And she’s also finishing homework & packing. It’s a lot to juggle. But she’s more than ready!

2 thoughts on “in preparation”