Back when I was a student, I hated the first day of classes (aka Read the Syllabus Day).  One semester I rather snarkily informed each of my professors how much I’d paid for their class that day, and that I didn’t feel as though I was getting my money’s worth when the day consisted of having the prof read the syllabus to me (especially because I had already rather-thoroughly perused the syllabus myself beforehand).

So this article about alternative First Day of Class activities struck a chord with me.

What I intend to do this year, which I am hoping will go over well, is to have students learn from my previous years’ students on the first day of class.  At the end of last semester, I had each student write a letter “To a Future Student” in the class, and I will pass these out and have the students read them and discuss them as a class, which I will then use to launch into a discussion about class norms, expectations, and policies.  I’ll then use that to lead into a brief overview of the class which will cover many of the items in the syllabus.

When I prepped my syllabus for the “Introduction to Digital Humanities” class that I taught last year, I included Ted Nelson’s article “Complex information processing: a file structure for the complex, the changing and the indeterminate” because I wanted my students to gain some historical knowledge about how modern-day computer interfaces developed from the ideas of visionary thinkers like Nelson.  At the time, I was unaware that Nelson would be a Visiting Fellow on our campus or that I would have the luxury of becoming personally acquainted with him. My students struggled a bit with the Nelson article.  Not only was it long, but his ideas didn’t seem to spark much interest.  As we discussed his piece together, I pointed out just how revolutionary his thoughts were in 1965, but that seemed to have little impact on their thinking.  Moreover, his ideas about hypertext, or links between words and documents seemed so obvious to their minds that it was difficult to underscore their significance.  So I took a different tactic and we created a list of all of the characteristics of Nelson’s imagined platform: it would be connected and iterative and creative and collaborative.  It would “grow indefinitely, gradually including more and more of the world’s knowledge.”

“Do you know of any platform like that?” I asked.

When I shared their reply with Ted a few weeks later, he seemed frustrated.  And I could see why.  Wikipedia, although a valuable resource and an excellent knowledge repository, is not a creative space.  Indeed, it tends towards being rather scripted and formulaic, as well as hierarchical in ways that don’t gel with Nelson’s vision.

My students’ response to my question about Project Xanadu points to the unrealized nature of Nelson’s early vision–we remain locked into ways of digitally writing that replicate paper and although many of us read e-books or use text-based apps of various kinds, they are simply re-presentations of analog modes of creation.  But it also points out a far larger problem: that the development of our computer interfaces and software feels like a “given” to most students.  They have difficulty imagining that computers could have developed a different way or with an alternate mode of interaction.  Which concerns me about how they may imagine their own future–as a series of inevitabilities rather than as dynamic and evolving threads of occurrences on a canvas that they can manipulate and shape to their liking.

On the walk to my office, I pass some spectacular 20th and 21st century art–the gems of Chapman’s collection (including a Lichtenstein, some Rauschenbergs, and several Ruschas).  And just outside my office suite is Mary Addison Hackett’s “Station” Yesterday when my daughter came to work with me and encountered the art in the outside hallway for the first time, she lingered longest in front of “Station.”  She marveled at the color.  So I dove a bit into the wormhole of the internet to learn about Hackett, and found her blog.  Fascinating.

I especially enjoyed seeing her posts about the painting that I walk past everyday.

But more than that, I liked her post explaining why she doesn’t tape the edges of her artwork.  Instead, she leaves the canvas bare to reveal the messiness of her process (note: click on the links below to see larger images). 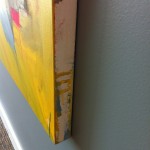 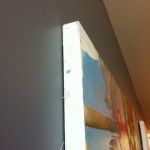 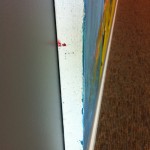 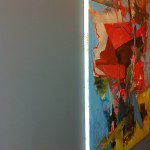 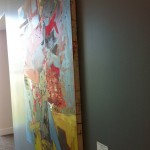 In taking these photos I found myself looking as closely as possible at the edges of the art to see if I could find any of her fingerprints there.  While I didn’t find any smudges that were obviously the marks of her digits, I enjoyed pondering the edges anyways.